Do you want to live in a world with no poverty, no hunger, no racism, and no war? Is that the Future You Want?

The United Nations with its 194 Member States, as well as global civil society leaders, are targeting seventeen Global Goals with 169 target indicators between them, to make it happen.

This movement is called the Sustainable Development Goals (SDGs), a follow-up to the Millennium Development Goals (MDG) movement. Hoping to advance the goals established from 2000 to 2015. The United Nations and its partners are confident, with better organization from regions and local areas. This movement (Agenda) and its goals will address the needs of people in both developed and developing countries, emphasizing that no one should be left behind.

Lets Go Over the Plan

The Sustainable Development Goals are focusing on three dimensions of sustainable development: social, economic and environmental, as well as important aspects related to peace, justice and effective institutions.

As mentioned, the SDG Movement has established 17 Global Goals and 169 target indicators by the year 2030.

The Seventeen Goals are: 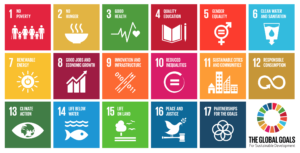 The SDGs target 169 indicators to support the 17 goals development were adopted at the September 25, 2015, United Nation’s General Assembly Meeting. Those target indicators can be found here.

No Way This Will Work

Before the ink dried, critics said no way is this realistic or feasible. They also say these goals; undermine the Millennium Development Goals (MDG).

A report by the International Food Policy Research Institute (IFPRI) of 2013 criticized the efforts of the SDGs as not ambitious enough. Instead of aiming for an end to poverty by 2030, the report “An Ambitious Development Goal: Ending Hunger and Undernutrition by 2025” calls for a greater emphasis on eliminating hunger and undernutrition and achieving that in 5 years less, by 2025.

The SDGs goals have been criticized for being contradictory, because in seeking high levels of global GDP growth, they will undermine their own ecological objectives. It has also been noted that, in relation to the headline goal of eliminating extreme poverty, “a growing number of scholars are pointing out that $1.25 is actually not adequate for human subsistence,” and the poverty line should be revised to as high as $5.

Other critics argued that the 169 target indicators  for the SDGs are too many, calling them “sprawling,” “misconceived,” and “a mess” compared to the Millennium Development Goals. It also criticized the goals for ignoring local context and promoting “cookie-cutter development policies.”

Critics also say the movement is not feasible. Estimating that trying to alleviate poverty and achieving the other sustainable development goals will require about US$2 trillion to 3 trillion per annum for the next 15 years.

To answer the critics, the SDG organizers are planning annual review meetings to report the progress that is being made. As well as, allowing the movement’s stakeholders to give their thoughts on what is working and what is not.

Will the SDG Movement Prove the Critics Wrong

If everybody involved, gets involved, this can change the world. However, that if, is a big if.

The Millennium Development Goals movement fell short of achieving its goals, because integrity and commitment lacked sincerity. Meaning, some countries and organizations, did not keep their word.

This time organization and dedication must be upheld to complete deadlines and fulfill obligations. If again, they are ignored; it will be equal to slowly letting the air out of the balloon. Progress will be stopped, and another 30 year’s will be lost.

Let’s hope, what is written on paper will become a reality. And mankind, is kind. And We Find the World We Want.

The Rise and Fall of the Millennium Development Goals